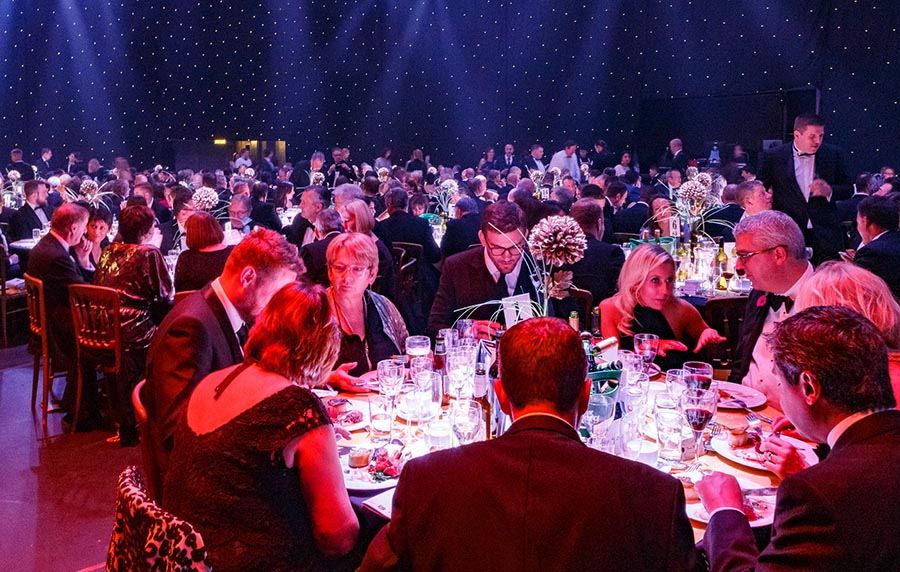 The county’s leading food professionals celebrated the best in food and drink at the Carlsberg UK Northamptonshire Food and Drink Awards in Northampton. The competition, now in its tenth year, celebrates everything great about local produce and drink, recognising excellence within the county’s dining venues and rewarding those who work so hard within the culinary sector. 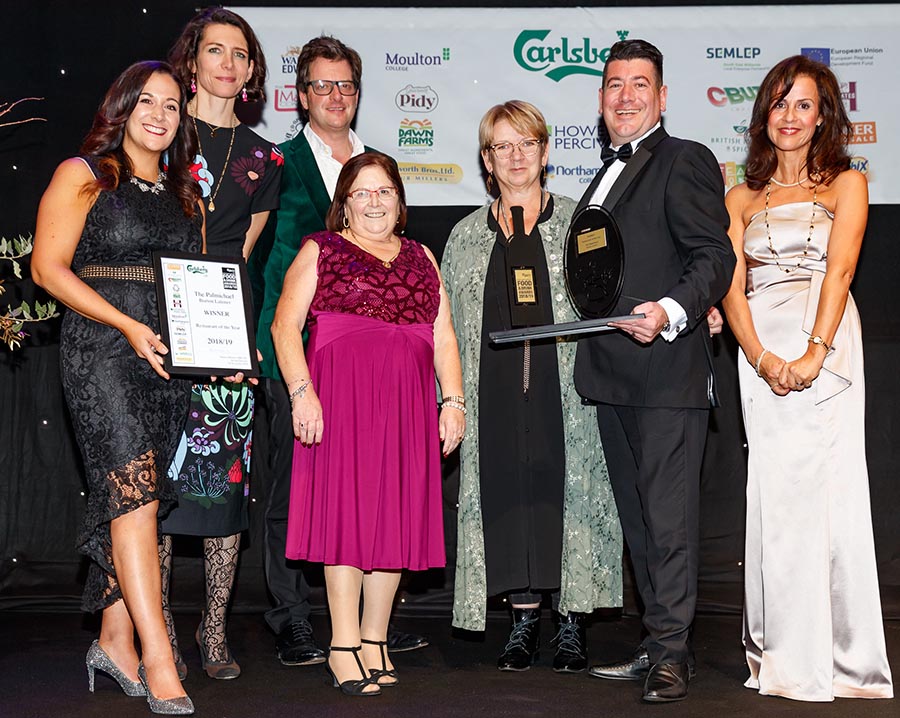 William Sitwell, Sophie Grigson and Vita Whitaker with the victorious team from The Palmichael.

For the second time in three years Palmichael, the Burton Latimer Italian restaurant, took home the Restaurant of the Year Award, sponsored by Whitco.

The winners of all 20 categories were presented with trophies designed by the Northampton firm Trinity Engineering – the figure 10 depicted as a bottle and plate to represent a decade of the Awards.  Masterchef winner, author and Wahaca restaurant group owner, Thomasina Miers and awards patrons William Sitwell and Sophie Grigson presented the awards.

Guests enjoyed a sumptuous three-course meal designed and created by Lee Scott, executive chef at Whittlebury Hall, and a team of culinary students from Northampton College who switched their regular classes for the experience of being part of the prestigious occasion.

The menu included a wealth of Northamptonshire ingredients, including a game terrine made using duck from award winners, Pastures Poultry Farm at Yardley Hastings, venison from Rutting Reds at Hannington as well as chutney from Northampton’s Friars Farm and goat cheese from Stanwick’s Neneview Dairy.

The local offering also continued into the puddings which used apples from New Creation Farm, blueberries from Mee Farmers at Nassington and chocolate from Corby’s Seed and Bean, accompanied by dessert wine generously provided by Amps Wine Merchants of Oundle, before concluding with petits fours generously provided by Belflair Chocolates of Brackley and tea courtesy of the Northampton’s Tea Lab Company.

Atul Kocchar, Britain’s first Indian chef to be awarded a Michelin Star was a judge at the Booker Young Chef of the Year cook-off final in September.  Atul admired their creativity, skills and calmness under pressure as they took on their two-hour cooking challenge, and paid tribute to the Awards and their impact on the sector over the last decade, something of which, he said, Northamptonshire should be most proud.

Thomasina spoke from experience of the value of competitive success following her television victory – which she admitted came despite her having served lumpy mashed potato to judge John Torode in the first episode! – and commended the Awards by congratulating all of those gathered for the evening’s celebration – whether finalists, sponsors, supporters or partners – for helping to create a spectacular culmination to its first ten years.

There was also a special presentation from the Lord Lieutenant of Northamptonshire, David Laing, who announced that the ‘Northamptonshire – Britain’s Best Surprise!’ marketing campaign would focus on the food and drink sector in 2019, pledging to bring the county’s culinary excellence to national attention.

Booker Young Chef of the Year
Arturs Dzerins of The Hopping Hare, Northampton

Restaurant of the Year
The Palmichael, Burton Latimer

Chef of the Year
Harvey Lockwood of Murrays at Whittlebury Hall, Whittlebury

← Coffee morning tops up Macmillan charity potDo you have a cookery school or a regular class? →